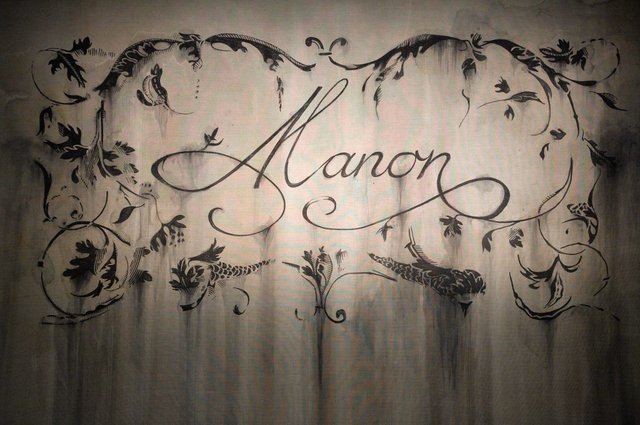 Scene 1 – The courtyard of an inn near Paris
The courtyard at the inn is frequented by actresses, gentlemen and the demimonde from Paris. Among them are des Grieux, a young student, the wealthy Monsieur GM, and Lescaut, who is there to meet his sister Manon on her way to enter a convent. A coach arrives bringing Manon and an old gentleman who has been very much attracted to her. Lescaut notices this and takes the gentleman into the inn to come to an arrangement with him over Manon. Manon remains outside and meets des Grieux. They fall in love and decide to escape to Paris with the help of the money that she has stolen from the old gentleman. Lescaut and the old gentleman come out of the inn, having made a bargain, and to their dismay see that Manon has disappeared. Monsieur GM tells Lescaut that he too is interested in Manon and because of this wealth Lescaut promises to find Manon and persuade her to accept GM.

Scene 2 – Des Grieux's lodgings in Paris
Des Grieux is writing a letter to his father but Manon interrupts by declaring her love for him. Des Grieux goes to post the letter and in his absence Lescaut arrives with Monsieur GM. Manon yields to GM's advances and when des Grieux returns, Lescaut persuades him that there will be great wealth for all of them if he, des Grieux, will sanction the liaison between Manon and GM.

Scene 1 – A party at the hotel particulier of Madame
Manon arrives at the party given by Monsieur GM and is clearly torn between the wealth of her companion and her love for des Grieux, who is also there with Lescaut. Des Grieux tries to persuade Manon to leave with him but she tells him that the time is not right and only will be when he takes more of Monsieur GM's money at cards. Des Grieux is caught cheating and he and Manon rush away.

Scene 2 – Des Grieux's lodgings
Manon and des Grieux once again declare their love for one another but Monsieur GM arrives with the police and Manon is arrested as a prostitute. In the ensuing struggle Lescaut is killed.

Scene 1 – The port
The gaoler of the penal colony awaits the arrival of the convicts from France. Manon has been deported to America as a prostitute and des Grieux has followed her there by pretending to be her husband. The gaoler now turns his interest towards Manon.

Scene 2 – The gaoler's room
The gaoler has arrested Manon but offers her rewards in the hope that she will desert des Grieux and live with him. Des Grieux, however, breaks in and kills the gaoler.

Scene 3 – The swamp
Manon and des Grieux have escaped into the swamp of Louisiana. All her former ambitions of wealth and splendour have been renounced for her love for des Grieux. While eluding their pursuers, Manon collapses and dies in his arms.