Duel of Magic Changes: Updates to the Neophyte System & Future Ring of Klytus

Out of Character message board for the Duel of Magic

Duel of Magic Changes: Updates to the Neophyte System & Future Ring of Klytus

Hello DoM Community! May 3rd marks the beginning of the Cycle of the Celestial, and with this new cycle comes changes to a few old systems.

First we'd like to discuss the Neophyte rules and I will be highlighting the focus of this post in bold red.


When a duelist reaches the rank of Mage, they may seek out a duelist to mentor. This duelist will be known as a Neophyte. They may perform this search any way they wish, be it an unofficial tournament, or an arbitrary selection based on any criteria they want. They can even just pick one out of the blue. A mage may only have one initial Neophyte, but once the Neophyte makes mage rank, this entitles the mentor to take on two Neophytes thereafter. The Neophyte sub-title is functionally identical to the Ring of Klytus, with the following exceptions: their mentor must be present in order to gain the benefit, and the neophyte may not use their mentor focus during a challenge match.

The neophyte focus may stack upon the Ring of Klytus focus, but not beyond the benefit of three focuses. Once a Neophyte becomes a Mage, they are automatically released from their Mage's mentorship. When a duelist is a Neophyte, they are listed on the standings with their mentor listed beside them. The relationship is not official until it is posted on the standings. The relationship can be terminated at any time by mentor or Neophyte.

Max and I have discussed this over the previous cycle and have come to the conclusion that this rule is out of date with the times and requires policing by both Staff and the Community -- and doing so can cause duels to screech to a halt for rulings. To both simplify and make things more open for creativity, this restriction will be no longer in effect.

Neophyte's may now use their gained foci without the presence of their Mage counterpart. We hope that by doing this that more mages will reach out to those of lower ranks and help them through the leveling process, while also reflecting that there is more to being a mentor to your Neophyte than simply showing up while they duel.

There is the OOC relationship both Mage and Neophyte may have when discussing tactics and the matrix and time spent outside of the dueling venues in-character, be it training, adventures, or studying, that these players would like to imagine.

This also opens up for more roleplay-ability.

How does your Neophyte get their focus? Do you make them a crystal ball that harnesses magical energy for them to use as a conduit in their fight? Did you give them an old magic wand that your magical teacher passed down to you? You're only limited to your imagination.

The Ring of Klytus will be going through changes starting at the beginning of the next cycle on July 5th. By doing this we are allowing all DoM Duelists to start on even ground during this new cycle for a fair competition. 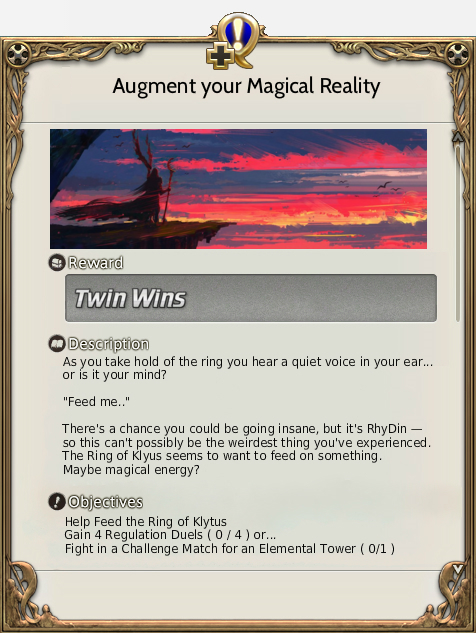 The process to win the Ring of Klytus will remain the same, and the ring will continue to give the benefit of an added foci (to the maximum of 3 focus) to holders, while the Augmented will do the same plus apply Twin Wins to the holders won duels.

Because of this the Ring of Klytus will be changed so that it can be won by ALL RANKS.

That concludes the updates to the Duel of Magic sport! Thank you for reading!
Top

Re: Duel of Magic Changes: Updates to the Neophyte System & Future Ring of Klytus

Hello DoM Community! Today, 1/10/2021 marks the beginning of the newest Cycle of Air and with this new year and new beginning comes a small adjustment to the Ring of Klytus and its Augmented feature.

A Win Percentage of 50% and higher is going to be required in order to obtain the Ring of Klytus going forward, in addition to having 8+ duels and being in the top Bracket. If there is no one with a Win Percentage of higher than 50%, then the Ring will be vacant for the cycle.

It is still open to be won by Mage and non-Mage alike, no further changes are being made at this time.

Also as a reminder, every cycle the Ring of Klytus does reset and the activity required to make it become Augmented needs to be repeated.

Return to “Duel of Magic (OOC)”

Users browsing this forum: No registered users and 3 guests