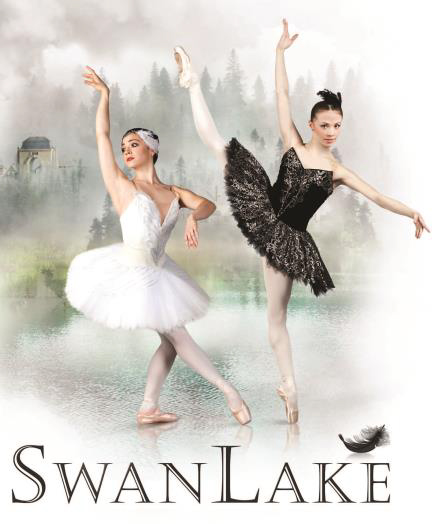 A magnificent park before a palace.

Prince Siegfried is celebrating his birthday with his tutor, friends and peasants. The revelries are interrupted by Siegfried's mother, the Queen, who is concerned about her son's carefree lifestyle. She tells him that he must choose a bride at the royal ball the following evening. Siegfried is upset that he cannot marry for love. His friend Benno and the tutor try to lift his troubled mood. As evening falls, Benno sees a flock of swans flying overhead and suggests they go on a hunt. Siegfried and his friends take their crossbows and set off in pursuit of the swans.

A lakeside clearing in a forest by the ruins of a chapel. A moonlit night.

Siegfried has become separated from his friends. He arrives at the lakeside clearing, just as a flock of swans land nearby. He aims his crossbow at the swans, but freezes when one of them transforms into a beautiful maiden, Odette. At first, she is terrified of Siegfried. When he promises not to harm her, she tells him that she is the Swan Queen Odette. She and her companions are victims of a terrible spell cast by the evil owl-like sorcerer Von Rothbart. By day they are turned into swans and only at night, by the side of the enchanted lake - created from the tears of Odette's mother - do they return to human form. The spell can only be broken if one who has never loved before swears to love Odette forever. Von Rothbart suddenly appears. Siegfried threatens to kill him but Odette intercedes - if Von Rothbart dies before the spell is broken, it can never be undone. As Von Rothbart disappears, the swan maidens fill the clearing. Siegfried breaks his crossbow, and sets about winning Odette's trust as the two fall in love. But as dawn arrives, the evil spell draws Odette and her companions back to the lake and they are turned into swans again.

An opulent hall in the palace.

Guests arrive at the palace for a costume ball. Six princesses are presented to the prince, one of whom his mother hopes he will choose as his bride. Then Von Rothbart arrives in disguise with his enchantress daughter, Odile, transformed so that she appears identical to Odette in all respects. Though the princesses try to attract the prince with their dances, Siegfried, mistaking Odile for Odette, has eyes only for her and dances with Odile. Odette appears as a vision and vainly tries to warn Siegfried that he is being deceived. But Siegfried remains oblivious and proclaims to the court that he intends to make Odile his wife. Von Rothbart shows Siegfried a magical vision of Odette and he realises his mistake. Grief-stricken, Siegfried hurries back to the lake.

Odette is distraught at Siegfried's betrayal. The swan-maidens try to comfort her, but she is resigned to death. Siegfried returns to the lake and finds Odette. He makes a passionate apology. She forgives him and the pair reaffirm their love. Von Rothbart appears and insists that Siegfried fulfill his pledge to marry Odile, after which Odette will be transformed into a swan forever. Siegfried chooses to die alongside Odette and they leap into the lake. This breaks Von Rothbart's spell over the swan maidens, causing him to lose his power over them and he dies. In an apotheosis, the swan maidens watch as Siegfried and Odette ascend into the Heavens together, forever united in love.

((You know what to do ... Post for your characters - cast, crew, guests, friends, and family - below. And remember to have fun with it!))
Top

It had been a very long time since Josie felt actual stage fright. Pacing in her dressing room, she tried to get her breathing under control. Her pulse accelerated to the point she was starting to hear that all too familiar ringing in her ears. It was beginning to gradually build in both pitch and frequency until it deafened the senses and threatened to consume her completely.

Her hands went numb as she squeezed them repeatedly to try and get sensation back. She knew the warning signs and she fought back against the growing sense of panic and dread. She could not afford another seizure. Just one last performance—just one more night of the run.

“Ten minutes, Josie...” The stage manager calling out the countdown to curtain through the door.

“This isn’t happening.” The words whispered softly to herself before she heard herself thank the stage manager. But it was happening and she felt very much out of her own body in that moment.

“Stop.” The word wielded like a weapon alongside what was vibrating within her very cells at the moment. Cells that no doctor deemed normal back on the planet that had never felt very much like home from the beginning. Where a diagnosis was all one needed to be shuffled quietly on through the system when certain questions could not be answered by all the “experts” in their fields. Wildcards had no place in a deck stacked against those that might defy certain rules and potentially change the game. They needed to be watched.

Several of the lightbulbs around the dressing room mirror began to audibly vibrate. The ballerina forced herself to sit, hands clasped together as she narrowed her focus on every single bulb till she got her breathing under control. The bulbs continued to rattle in their sockets, the vibration intensifying with a rapidly approaching harmonic resonance, the frequency threatening to shatter the delicate glass into countless shards.

Mmmm…don’t do that. I don’t want you tame when it happens. That release is so euphoric—so enrapturing when it comes. You’re glorious. You’ll come back. You already know why. Why exhaust yourself like this? I can give you what you desire. This perpetual struggle can end. Aren’t you tempt....

Her phone vibrated on the dressing room table, nearly breaking her concentration as she looked down for a split second to see that it was Isaac calling. There came the tiniest of oscillations within the mirror when she shifted her gaze. It took every bit of willpower she had not to answer that particular call in that particular moment.

Better not keep him waiting. You know...it’s his own darkness that spawned all this. Did you know that? And you think to blame me. Tsk. Such a rare connection…yet so potentially volatile and vulnerable. Do you dare sever it?

Josie ignored the phone and ignored the voice. It only made things worse. Yet that disregard and doubt the crept in tempted the bulbs to resume their discordant frequencies once again. The blue-green patina of her gaze returned her concentration to the bulbs till she saw geometric patterns shifting within as some might watch continually shifting cloud formations. The orbiting rings of copper around her pupils igniting with a certain celestial glow as the even the structure of room itself disappeared within her mind, the metaphysical equation coming into balance and eventually stilling the bulbs with a tranquil finality.

A trickle of blood dripped from her nose as she could once again feel the solid chair beneath her and supporting her before quickly grabbed a tissue from the dressing room table before it stained her costume. It was her own fault. It was her own fear that let that particular frequency in and he took every single advantage he could the very second her guard went down while she internally fought to change the dial.

Brava. We will see one another again soon.

It was not till that prurient voice was gone and the rapacious energy faded that the petite ballerina picked up the phone to listen to Isaac’s voicemail. Her slender fingers were still shaking, all pins and needles as she shook them out. Hearing her brother’s voice steadied her and her curiosity sparked as she heard something entirely new in his tone.

Tempted to call back, the second knock sounded and it was the divo Dante’s voice that came through this time. He reminded her that this was the last night she would get to boss him about as Queen on stage to tell him how to live his life, so she damn well better hurry up and enjoy it.

Some nights...she truly regretted that the crossbow she gifted him on stage was just a prop.

(Many thanks to the writers of The Hedonist and Dante for their collaboration and permission to use their characters.)

“Perfection is static, and I am in full progress.”
—Anaïs Nin
Top
Post Reply
3 posts • Page 1 of 1