Add me to the list. I shall make an attempt to attend.

Let's see how it goes.
Top

i'm not Saying that harris is standing bEhiND me, making me do this. i am signing up of my own free will. tHEre is Literally no coercion of any kind. Peace.
"LORD, WHAT CAN THE HARVEST HOPE FOR? IF NOT FOR THE CARE OF THE REAPER MAN?"
Top

Jaycy had heard of the big event, amazingly, and wandered her way to the Outback briefly. It was quiet when she arrived, and she traveled through the room, finally stopping at the boards. Her gaze went immediately to the announcement - it was the only thing of any interest - and took in the various markings of intent to enter the historic contest. Her eyebrows rose at a few.

“Some of that handwriting is familiar.”

Brows knit as green eyes studied the papers again. Finally she took a crayon, quirking a sudden grin at the memory of an old friend, and scribbled a short note.

She replaced the crayon and wandered off, the amused light brightening her face.
Top

Tarl Will return to participate in the 100th anniversary
Top

18 are signed up so far and we're hoping for more!

As a reminder, there's no activity requirement to join Diamond Quest C. If you rank to Emerald before the DQ begins or retired as an Emerald, or are currently on the standings with at least 15 wins but listed as active or inactive, you're eligible to enter!

Walk-ins are most definitely welcome but signups in this thread help us get as much advanced planning done as possible.

We look forward to seeing everyone on Saturday! 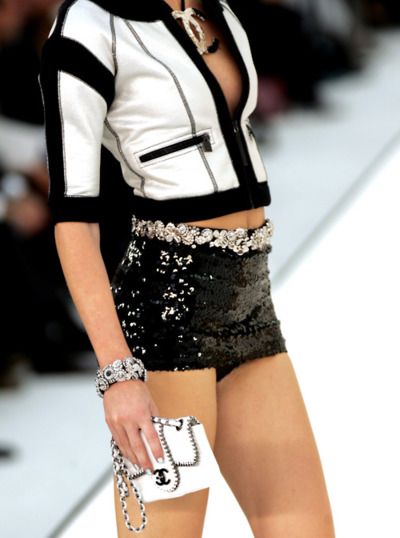 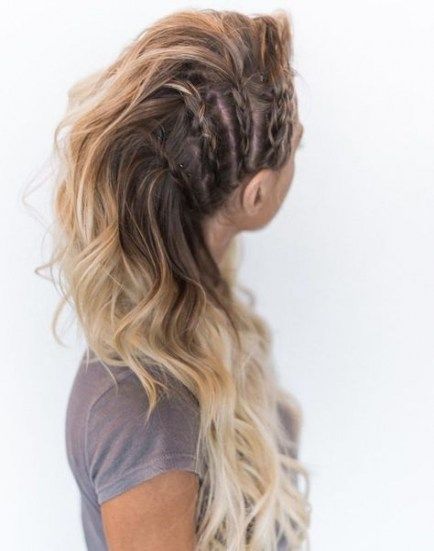 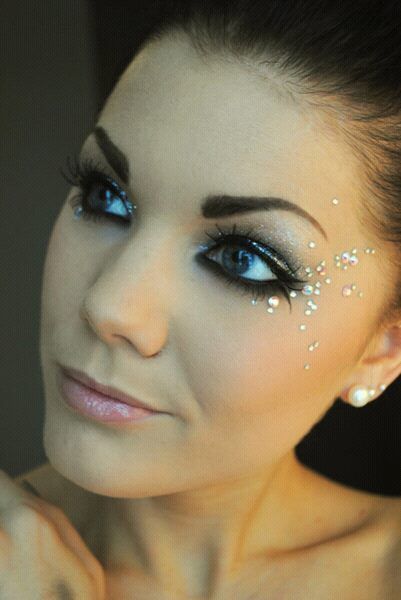 Diamond Quest 100 was a big deal, and the 99th Empress Diamond dressed accordingly. She wore a diamond belt with her hot pants and a white/black Real RhyDin jacket. It wouldn't be a win if she didn't win it all in high heels, so white and gold ones were on her feet. Her blue hair was off her face in a semi-plaited faux hawk, showing of the diamond themed eye makeup.
Top

Behind the bar at the Red Dragon Inn, Conner Reid has posted a list of the Diamond Quest 100 entrants. Until the tournament starts, Saturday night at 8:30, Conner will be taking bets on the winner (and any side lines anyone might be proposing). The more bets received on any individual fighter, the higher up the list they'll appear. Place your bets now until fight-time to back the fighter of your choice!

((Keep your eye on this list, as it will be edited to reflect the current bets received. Feel free to DM me with your character's bets! Any time until fight time! I'll do my best to update this list throughout the day!))
Last edited by Conner Reid on Sat Jan 18, 2020 8:33 pm, edited 4 times in total.
Top

Portishead quietly droned on through the cell phone, giving a smooth background chorus that was practically Peaches' ritual when getting prepped for a gaudy night out. Tonight was special; there was a certain buzz in the atmosphere that she could feel in the tunnels of her bones, a prequel of excitement muted only by the fact that the sun was still hovering a long the horizon. She was sat in front of a full length mirror in a relatively clean spare room that she had crashed in many times, a homage to the days of when Terry and her shared the same space albeit bigger. A few clothes were strewn over the well made bed, mostly different options of dresses that she still hadn't decided on yet. Lyrics were recited beneath her breath when she leaned in to make sure to draw on the liner thick and accurate a long the silky wings of her eyelids. Her hair wasn't done, towel dried in a mess over one shoulder. A pair of snug cotton shorts and a thin tank top sticking to the glow of her skin.

From the mirror she could see behind her at the door way, noting Terry's shadow crossing the threshold like the girl was pacing. In fact, Peaches knew she was. Her mouth flickered into a soft petal smile.

"What're you doing out there?", crooned in a sing-song tune, borderline teasing.

"Tryin' to break in these shoes a lil'.", came a response laced in annoyance.

The pacing had been indeed Terry walking up and down the hallway. The thought of a new, fresh pair of footwear had been a lovely one earlier in the week — then came the delay in delivery until the day of the Diamond Quest. This left Terry little time to try and wear out some of that awkward tightness she's feeling clenched about her feet. A note was made to herself: Don't be lazy and just go out and buy them in person next time.

With Gabby on a business trip, Willow with her Grandfather, and Mary currently staying at the dorms to live the full St. Mary's lifestyle, the house had been a rather empty one for the past few days; which meant the sirens not-so-impromptu dressing room shenanigans and Terry's own footwear issues made things a little more lively.

While she continued to pace fingers were at work fixing the tie that hung, for the moment, loose about her neck. "I'm kinda' wishing I went with a dress instead." But she already bought the outfit so it'd be a waste not to wear it.

"Should have got them earlier, yea'?" Not really chastising but putting some emphasis on what she felt like she had tried to delegate to Terry before. A snicker ruptured past her teeth and tongue, twisting some to look behind a bare shoulder at the sight of Terry going back and forth in front of the door. "Just sit for most of it. Make it easier. They're nice shoes." Tilting again to reach around in an effort to grab at all the lions mane of her hair, twisting it together to feel the dampness.

An empty house quickly turned into a kingdom of laughter and hijinks, a specialty of the girl-creature who sat in front of the mirror now. It was very much like the golden days of their friendship except less scrounging for money, less heartache. Much less tears and pain.

"You can borrow one of my dresses." Leaning forward into the mirror to start on the left wing of her eye liner. It wasn't meant to be a jest but if one thought about it long enough they would find the hilarity in Peaches' offer.

"Tsk," She sucked a little through her teeth after the click of her tongue. "Too loose in the chest and a lil' tight in the back, gonna be a hard no." Terry's quip came quick enough after an almost exaggerated look expressing how unconvinced she is.

"I'm already suited up anyway," She only needed to grab the suit jacket to finish the ensemble. She'd handle that on the way out and instead step into the room so she could lean over the blondes shoulder to take a look at herself in the mirror. ".. Ain't too short, right?" Speaking of her hair. Obviously. A week back she had much of her locks cut away and is now sporting a shorter look once more; shorter than the norm she wore in her teenage years.

"Just stuff some toilet paper in the chest." Brushing her eye liner wielding hand across her front to give some show of what she meant. Laughter sprung up but was mostly quiet, much louder in her body language as her shoulders gave a quake.

When Terry peered into the mirror, Peaches looked up some to gauge the shortness of her friends hair. "I think it looks pretty good on you, yea'? I can't really imagine you with long hair; short suits you." Ruffling through her wet locks, now curious to know what she would look like had she had the courage to cut it all off. It instantly registered as wrong in her head and she made a face to show her distaste with the image.

"You nervous at all for tonight?" A casual question that some might think was weighted but the lofty way the siren murmured it was sweet, the timbre soft.

"Jus' try not to fall in love with me." Making sure to end that with a wink at the mirror... and then a sudden puffing of her cheeks for a comedic sort of face. This expression escaped her features as she began taking up her cufflinks.

"What do I got to be worried for?", an even more casual answer. Terry straightened her back while working the wrists of her top. "Honestly," which at times can be the best policy. "I'm still thinkin' it over. But, it'll still be a good night —," The second cufflink set. "Seein' who gets the 100th Diamond. I saw Jake's name on the list, so I'm pretty sure it's goin' to be him."

Her hands free from their latest quest and so they came to rest against Peaches' shoulders. "I'm gonna catch what I can of the game before we leave. Don't take too long, you already look perfect." her light hearted tone coming with a gentle squeeze.

"Too late." Chin tipped up, eyes glossed over with mirth while her expression attempted to be stoic. "I've loved you since day one."

Peaches watched Terry fidget with her cuff links via the mirror. "Lots of old faces popping up for it. Some newer ones, too. Jake is probably a safe bet; Hope is in it, too." Thinking back to the roster of top end fighters. She sucked on her teeth and gave a puff of air out. "I'm just amazed it's the 100th one, yea'?" She felt that buzz through her bones again. It felt heavier this time around. Was the culprit behind how she shrugged up one shoulder as if she was shaking something off.

Terry knew how to easily appease the attention starved siren. The compliment made her give a lighthearted laugh, her face tilting to give a quick, platonic kiss to her friends knuckles. "I might as well just go in my pajamas, yea'?"

That was a complete jest though she thought about it briefly. 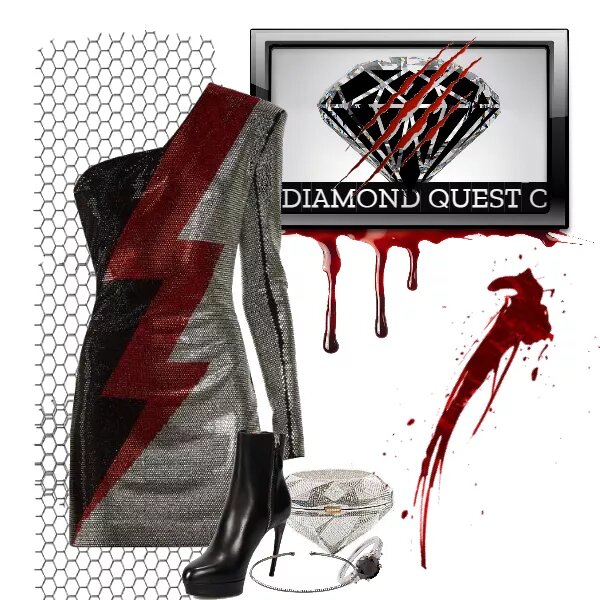 ( Written with King and posted with their permission! )
Top

Amaris' outfit her hair the same way but red of course

She painted her face

MoonBeryl insisted she come still attend, despite her losses, with a sly comment: You're already better than Dex. You've held me longer than he did. Carry your father's legacy. 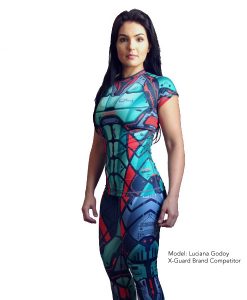