Take a Chance in Cadentia

Take a Chance in Cadentia 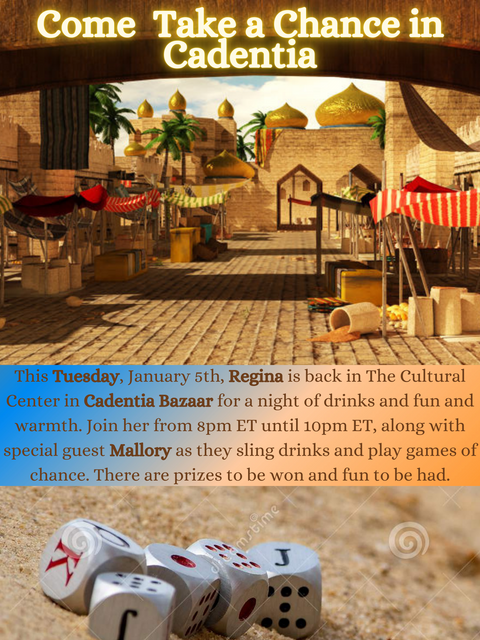 Re: Take a Chance in Cadentia

Mallory will be on hand to read a fortune or two or she might be convinced to play a few rounds of Cho-han.

Regina will be running a new game called Stuck In The Sand. (Winners will receive prizes!)

The game uses two standard six-sided dice, which are shaken in a bamboo cup or bowl by a dealer. The cup is then overturned onto the counter. Players then place their wagers on whether the sum total of numbers showing on the two dice will be "Chō" (even) or "Han" (odd). (This game has been known to get rowdy so make sure to keep an eye out, or in!)

Stuck In The Sand Rules:

This game is played in rounds. Each player takes turns rolling the die trying to get the highest number of points. Any 2 or 5 rolled will cause those die to be stuck in the sand and non playable for the next round. This continues until the player has all of their die stuck in the sand.

The player with the highest points at the end of each round wins!

Round 1: Regina starts with five die. She rolls all five: 1,4,2,1,5
There is a 2 and a 5 so both of those die are stuck in the sand and there are no points awarded this round.

Round 3: Regina rolls 3 die. 2,2,4
Two of the die landed on 2 so they are both stuck in the sand and there are no points awarded this round.

Round 4: Regina rolls 1 die 5
Her last die landed on 5 so it is stuck in the sand and her game is completed.


You don't have to play the games to come by The Cultural Center and have a good time. Come by and enjoy some of the wonderful food and drinks the Center has to offer!
Top
Post Reply
2 posts • Page 1 of 1